As farmers, we want eventually to target tuberculosis where it found, rather than a bureaucratic, high profile sweep of wildlife. But circumstances (and dead cattle, sheep, pigs, alpacas and cats) dictate that while levels of zoonotic tuberculosis in its wild life hosts - badgers - are so high, then an interim population reduction is working well. And we would encourage farmers to take the opportunity this new government has offered, without the Viva supported drag anchor of the LibDims - [link] and get on with it.

But what then? We can't keep having bureaucratic area culls, and many would prefer to aim their fire at diseased badgers, rather than all badgers. And so we come full circle to the PCR study, SE3280 which last year was said not to be delivering expected results - [link]

On May 14th, Professor Wellington gave a lecture at Liverpool University, discussing the work, which can be viewed on this link

There are some fairly sweeping and totally contradictory statements concerning cattle and zTB in that clip, but she did mention sheep and cats. Nevertheless the core issues of identifying diseased groups of badgers, as opposed to healthy ones is addressed. And appears to have been successful. Professor Wellington indicated that 20 samples over 2 days in spring or autumn is the optimum for the qPCR screen, and at around £10 each, the cost is not astronomical.

It would appear that infection levels in spring and autumn are very high as social groups shake out their old and young, and re group. This presents a danger period for cattle, if one assumes that badgers can be kept out of cattle yards in the winter.

The complete paper is "The Diagnostic Potential of Real Time PCR: Proportion of badgers clinical - Travis et al" 2014  Click the link for Final Report on this LINK
Key points we noted are:
* The degree of infection [identified by culture, gamma IFN and StakPac bloods] strongly correlated with the degree of shedding as determined by faecal qPCR.
* Sensitivety was 100 per cent
* Specificity 95.7 per cent

"We suggest that a small number of social groups may be responsible for the majority of m.bovis shed in the environment and therefore present the highest risk of inward transmission". 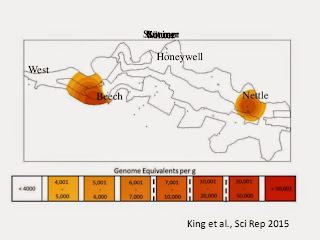 Above is a screen grab from Prof. Wellington's film clip, during her excursions to sample faeces from the inhabitants of Woodchester Park, and the level of infectivity in the various badger groups.
Posted by Matthew at 8:36 PM