We are hearing many heart wrenching tales of lorry loads of cattle, and in some cases whole herds - all headed for premature slaughter after failing the Gamma interferon - [link ] blood test.

We wrote about this test in 2008, and described the problems with it in this posting, [link] where we quoted snippets from the infamous pilot, carried out by Defra into the use and in particular, the specificity (false positives) associated with Gamma - which were summarily dismissed..

These are described in a paper labelled SB4021 - [link] and where those unexpected results - 25 per cent of one herd, expected to be negative results - were ignored.

Comments on the thread above pointed out that the condition of bloods and timing of samples v. their delivery to a laboratory are crucial to results. And the lives of our cattle. And we hear that other countries using the test do not use it as a slaughter test. Results have to be confirmed with a skin test. And in 2006, after the pilot study (which excluded any  results the team did not expect to find) Hansard records thus:


It was research project SB4021 ( ) that was established to evaluate the specificity of the gamma interferon (IFNg) test. This project confirmed the findings of previous studies by concluding that the commercially available IFNg test had a specificity of between 95-97 per cent. Findings from SB4021 supported the view that it would be inappropriate to use IFNg for routine screening purposes because it risks producing too many false positive results.


A further roll out of Gamma ifn, by invitation only, failed to attract enough support and petered out.

In the interim, studies found that a priming skin test increased sensitivity of gamma, which got Defra very excited, but we can find nothing to contradict the findings of that Pilot study SB4021. And this showed the ability of gamma to hoover up as positives, many micobacteria in the MTC (Micobacterium Tuberculosis Complex) family. Many of which are widespread and harmless.

So fast forward to 2016 and a 'consultation' to tell us what Defra have in store for our cattle next. And we see this for Gamma ifn in 2017:


Gamma testing is being used in the following circumstances:


"From April 2017, the gamma test will be applied alongside the skin test to help resolve TB breakdowns with lesion and/or culture positive animals in the HRA where any of the following three criteria are met:


* Criterion 1: The APHA veterinary investigation concludes that the most likely bTB transmission route for the affected herd was contact with infected cattle (e.g. via cattle movements, residual cattle infection from a previous TB breakdown, or contact with a contiguous infected herd) and measures are in place to prevent further spread of the disease from this source


* Criterion 2: The infected herd is located in one of the areas where at least two annual rounds of effective licensed badger population control have been completed


* Criterion 3: There is clear evidence that repeat skin testing of the herd has failed to resolve a TB breakdown .

And so it is. With devastating results - especially in herds which fall into criterion 2. i.e, the owners have signed a contract to manage badgers in the area. And having followed the prescribed scatter gun approach to disease control by culling 70 per cent of badgers, on 70 per cent of the area and leaving the rest to wander, if the herd has the misfortune to go under restriction with at least one lesioned or culture positive reactor. Then as we read this, no epidemiological veterinary interpretation of the herd history is needed. Just point and shoot.

The only criteria being a signature, on a contract drawn up at least two years ago.

Thin ice? On a legal basis, we have grave doubts about this. Leaving aside SB4021 and the failings of gamma ifn, so ably covered by Defra's soothingly modelled statistics, can it be legal for one party to add conditions to a contract already signed and paid for?

We pointed this out in this posting - [link] but it has taken a few months to really hit home, in terms of cattle slaughtered in GB which totalled 43,564 last year. The highest ever in our memory.

The use of this screening test has been variously described to us in less than enthusiastic terms  by Veterinary professionals - [link], but the word which stood out is 'madness'. And with that we would not disagree. 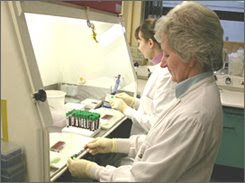