It's been a difficult year for many of us. The weather has played a few nasty tricks, and left its mark on fodder stocks and straw prices. The prolonged dry period which followed compounded this, but typing this on a dull, wet Sunday afternoon, some sunshine would be good.

A few notices have been posted in the last month, possibly the most important is how successful the culling areas -[link] have been. A total of 32,600 badgers have now been removed. Which is a sobering reminder that in the early 1970s, the Mammal Society put the total number of badgers in GB at an estimated 35,000.

Below is a snapshot of the 2018 cull totals, with Areas 1 and 2 omitted as these pilots are now into their follow up strategy of maintenance. The report explains:


Given the ongoing reduction in badger population estimates in Areas 3 to 21 since the start of their licences, these areas will see the benefits of reduced disease in cattle over their four year cull period. The initial cull areas are starting to see these benefits, with the number of new confirmed cattle breakdowns dropping by around 50%. (Fifty per cent)


In Area 1, the incidence rate has dropped from 24% to 12% in the twelve months following its fourth year of culling. Similar results were observed in Area 2, which dropped from 10.4% to 5.6%. A full analysis of the data, similar to that of Brunton et al. in 2017 is underway and will be published in due course.

A link to the Brunton paper is in this posting - [link]


And here are the 2018  badger removal figures: 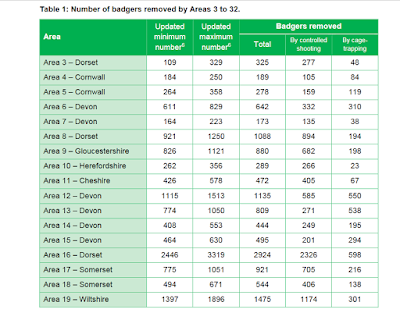 Latest news from one cull area in North Cornwall - [link] also reports a significant drop in cases of TB in cattle, after just three years of badger culling. Farmers Weekly has the story. Long may it continue.

Conversely we have seen both politicians and Z list eco-slebs, playing to a gullible media, hurling equal parts of bile and blame against cattle farmers. Scratching up isolated cases of reactor fraud and making a huge meal of what is a very small proportion of millions of tests.

We cannot defend any fraudulent testing - be that by farmers or vets. And the sooner all compensation, tabular or valued is removed from perpetrators, and testing licences removed from vets found guilty, the better.

Bio-security accusations are also an ongoing niggle, when the primary culprit of disease spread enjoys ultimate protection, wherever it walks, and in whatever state of health it may be in.

We would also point out that the ongoing support for badger vaccination is as big a red herring as it ever was. And no amount of BCG at 10x the strength for a human being, jabbed indiscriminately into the backside of any passing badger is going to make any difference to cattle TB in the area (as Wales has found)

In fact it could be said that by increasing the available bacteria into a candidate already infected with zTB, that badger will be uplifted into 'super excreter' status. And the amount of bacteria he will excrete, before he eventually expires in a most horrible fashion, could bring down a herd of cattle with no help from his sett mates at all.

So to all our contributors, in whatever part of the world you may be, our grateful thanks for your stories, experiences and technical help.

A Merry Christmas and a peaceful TB free New Year. 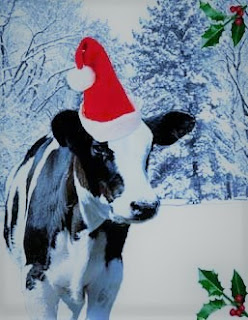