Before you all get excited, this is not GB we are talking about but New Zealand.
They have a website where their graph of eradication progress is in striking contrast to ours. 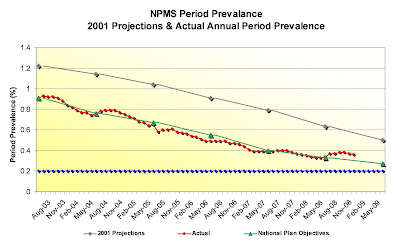 Their aim they say, is by 2013, to reach the international (OIE)standard for TB free trading status.

The international standard for TB freedom is reached when 99.8% of domestic cattle and deer herds have been free of bovine TB for three years. This figure has been set by the Office Internationale Epizooties (World Organisation for Animal Health).

And to achieve this, the problem is tackled in the round.
The TB control programme in New Zealand is guided by the National Pest Management Strategy for Bovine TB (NPMS). It is managed by the Animal Health Board under the programme name "TBfree New Zealand".

The programme works on two fronts:

Please read the last bit of that again. "Aiming to control and contain the wild animal species resposible for spreading disease to cattle and deer."

So what do we do here in the UK?

The boss was in snarl mode this morning and most eloquently described Defra's non existent 'vector control', and its counter productive result thus:

" By killing cattle who have had a slight reaction to the skin test,(IRs) Defra are destroying the natural immunity of the national herd to infection from an untouched wildlife host. And by keeping that wildlife host intact, they are providing a constant supply of fresh victims, with absolutely no natural immunity, thus perpetuating the problem."

Defra may seek to turn New Zealand's map upside down, and persuade themselves that in fact their TB incidence is heading the same way as ours. But it is not. They are within touching distance of becoming officially TB Free. And by the time they are, the numbers of cattle slaughtered in GB will have almost doubled from the 2008 pyre.
Posted by Matthew at 7:02 PM