She couldn't see it coming.

Over the years we've told you stories of companion animals who have fallen victim to what Defra like to refer to as 'environmental TB' - or as we call it, TB infected badger pee. In 2006, we told you the story of a small herd of dexter cattle, and in particular, a young bull called Fern.
Shambo, the ''sacred bullock' made headlines and a few diplomatic incidents the following year. But today we'll tell the tale which will make no headlines, except among dairy farmers. 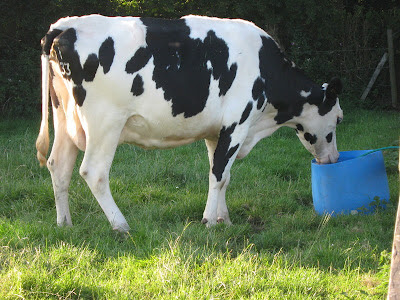 About 5 years ago, this young cow was born into a large SW dairy herd. One which our friends at the Badger Trust tell their members and anyone else who will listen, was all about profit.


And she was born blind.


While the media is full of pictures of shiny, cuddly badgers, Jack Reedy, at the time vice chairman of the Trust, gave his opinion of dairy farmers in a BBC interview. He said that:

".... the TB problems of such farms are like "shoe pinches" because of the "economic penalty" which a breakdown entails and not because of its impact on the animals or farmers. He went on to say in this interview that it is "very unusual for farmers to get fond of their cows" and that they are "usually very careful not to."

"Cattle are not pets", he helpfully pointed out.

This arrogant oversimplification is marginally less offensive than his predecessor's 'cattle get killed anyway' comment, but let that pass. The implication here is that if cattle farmers are paid enough, then they'll roll over and their TB problems will just disappear. Or at least farmers won't whinge about them so much. So Jack, this story is just for you.

When she was a calf, this young animal (we'll call her 'Daisy')was not destroyed, but kept in the same group of calves of similar age until she was about 18 months old. The herdsman and owner then thought long and hard what was best for her and as she was thriving - and blind or not, seemed to be coping quite well - she was put in calf with the rest of that group. The thinking was that if she had to be kept isolated, then that was what would happen. But 'Daisy' was happy with 'her' group and in 2010 calved a heifer calf. She was kept in the straw yard and walked daily into the milking parlour with no bother at all. But without her mates, she seemed unsettled and wanted to go with the main group into cubicles, and in the spring, out to grass.

As 'Daisy' knew best, she was tried with the main herd, and blind or not, she fitted in perfectly. Last summer, when she was dried off to calve again, she was put in a small field by the house, with an old 'granny cow' for company. So here dear readers, (and Jack Reedy) we have a blind milking cow and an 'old granny' companion, treated like royalty by a big commercial dairy herd. Nah, that can't be right - farmers are all about money. Reedy said so on the BBC, so it must be true.

The herdsman spoils this young cow. He told us that she knows his voice, and comes to call for food and water. As does 'granny'. He says "she is the most trusting cow I have ever known, knows my voice when I talk to her and will follow me anywhere." 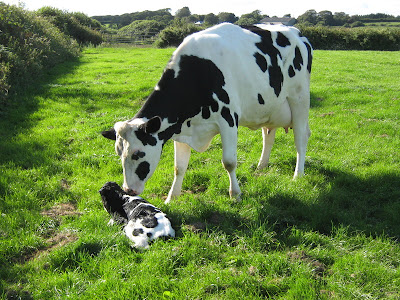 And I think you can guess what we're going to say now, can't you? Last august Daisy calved again, and mothered this calf as well as she did her first.

She wintered well with the rest of her herd mates and is in calf again. But last month both she and her companion, 'granny' became TB reactors. So this week they join the other 38,000 cattle victims which Defra are happy to kill annually, on the altar of votes and lobby money badger worship. The difference being that this young cow would never have seen what will ultimately have caused her death.