.... the actions of the Department of Environment, Food and Rural Affairs' post infection treatment of a farm where all the cattle were slaughtered due to Foot and Mouth Disease (FMD) and one where cattle are slaughtered out to control Bovine (Zoonotic) Tuberculosis (zTB).

More and more herds of cattle, alpacas and farmed deer are falling into the latter category. It is a drastic step, but if cattle or 'other species' reactors reach a level where infection has been such that the rest of the herd is likely to become reactors at the next test, then permission is sought from Defra to 'depopulate'. Which is a comforting word for slaughtering the lot.

We told the story of one such cattle herd, in this harrowing tale, and followed it up with the story of their restocking in this post.  But only now, five long months after the loss of their pedigree dairy herd, are Louis and Gillian Bothwell able to reflect on the cost of this traumatic exercise. And the comparison to an Defra / AHVLA instigated herd 'depopulation' due to a non zoonotic virus is staggering.


During the carnage of FMD, farmers received a valuation for their animals which reflected loss of production too. Some were also given the opportunity of doing Cleansing and Disinfecting (C&D) work themselves, under supervision: all this to keep the rural economy alive until farms were able to restock. The going rate was over twice the minimum wage at the time. If farmers didn't choose to do the work, Defra sent in teams to do it for them. And only when they were sure that no trace of the FMD virus was left to reinfect incoming stock, was the farm given the all clear to buy in cattle again. Thus taxpayer's investment was protected and not frittered away in repeated recrudescence of disease.

After a herd depopulation for zTuberculosis, a bacteria which not only affects but can kill humans, the compensation money for reactor cattle is a meagre, average, tabular basic, which is not enough to buy even 3/4 of good pedigree cow. The farm then receives a 'wish list' from Defra / AHVLA of all the work which must be done before restocking is allowed under license. And all this work is at the farmer's own expense. And of course, after decades of non-policy and hefty claims, very few of us are able to obtain insurance, at any price.

Thus a farm depopulated for zoonotic tuberculosis faces several months with no income, compounded with loans and mortgages still to service and an AHVLA shopping list of biosecurity 'must do' jobs to prevent badger access to buildings and feed stores. But not a goddam thing is aimed at the carriers of the bacterium which caused the havoc in the first place and are likely to still be roaming the grassland they call 'home'..

How can that be good value for taxpayers? 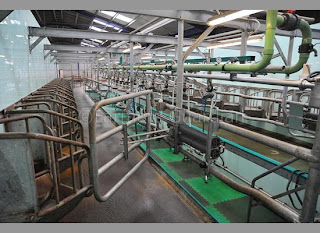 And is it survivable for any business, let alone a fledgling one, deeply committed having 'invested for the long term' in British agriculture?

This is the milking parlour at the Bothwell's Staffordshire farm, and this week they updated their story to Farmers Guardian's political editor, Alistair Driver.


A year ago the Bothwells were full of hope. They had invested £500,000 in upgrading their Staffordshire dairy unit and were pouring their heart and soul into building the business. “We were just the right age to do it. We had our own heifers coming in. We were getting where we wanted to be. But this has completely shattered everything,” Gillian Bothwell said.

Describing the nightmare, her story continues:


The financial toll is huge on the family, already in excess of £100,000 and counting, after more than three months without a milk cheque, preceded by falling yields, plus the cost of getting the farm back into a condition to re-stock. So how do you cope with a young family of three boys without any income for three months?

“All the time you are living with this shadow over you, worrying about what is going to happen,” Gillian said. And Louis points out that while still under TB restriction, they are unable to sell calves not needed for herd replacements and  accommodation is getting crowded.


"We have got 40 calves which need to be fed, no money coming in and we can’t sell them. Winter is coming and we are not going to have enough room,” Louis said.

While the new dairy herd is mainly kept inside 24/7 as AHVLA instructed (they did allow limited grazing between 10 and 3 when no badgers were thought to be about - no comments from us about that daft idea) after two clear tests on their remaining youngstock, (who were grazing outside) the Bothwell's July test revealed six reactors in these youngsters. And knowing what we (and AHVLA if they care to read up on it) do know about the survival of m.bovis in the lea of hedges, away from a couple of hours of direct UV light, the advice given to the Bothwells was crackers. Stark staring bloody mad.

The badgers which caused that huge infection and 97 reactors last autumn and led to the slaughter of 147 prime pedigree holsteins, are still there. Many will be still infected. Those that are have not miraculously recovered, died or emigrated. And either they or the detritus they leave behind will infect these cattle again. And again and again...

And so to go back to our original point: the restocking protocol is a starkly different scenario when herds are slaughtered out for a non zoonotic animal virus, from that experienced by cattle farmers who have the misfortune to share cattle grazing with tuberculous badgers and lose a herd.

And that is very, very wrong from every possible angle.
Posted by Matthew at 9:07 AM