While Defra and the Badger Trust play mind games with the disease known as 'bovine' tuberculosis, the reason for its eradication was made only too clear in yesterday's Times newspaper.(link)

Unfortunately, this article by Dominic Kennedy, is hidden behind a pay wall, but briefly he has picked up on a increase in tuberculosis, possibly linked to pets and companion mammals, in people under 40 who would have been born after the cattle TB eradication sweep of the 1950s and 60s, and also the widespread pasteurisation of milk


" The more TB there is in the world the more the chances are that it's going to spread. This is why we are trying to control TB in cows and other animals. There have been cases in which pets and humans have been infected with the same strain. One possible explanation for the increase is that there is more transmission from wildlife to humans."

Almost a decade ago, the then Chief Medical Officer remarked that if 'tuberculosis is being controlled successfully, there will be a fall in cases of bovine TB involving under-35s born in the UK.'

But Mr. Kennedy reports that statistics from Public Health England,(link) (formerly the Health Protection Agency) suggest that Britain has failed to get the disease under control, even though their 2012 report states:


The number and proportion of cases due to M.bovis continues to be very low, suggesting that the epidemic in bovine and non- bovine animals is not spilling significantly into the human population.

They could have added 'yet' to that rather comforting statement. But as Z Tuberculosis is a slow burn disease, exposure now is unlikely to become a full blown disease problem for several years, if not decades.

But we learn that many farmers with lesioned reactors in cattle, alpacas, sheep, deer or pigs have not been contacted by PHE for screening at all. And if they have, and they have had positive blood tests (rather than just chest X rays, which may well prove to be a bit late) they are counted as 'monitored' or 'watched' but not 'positive' to m.bovis in these stats.
So very similar to our own Defra's TB in 'other species' statistics, only a positive culture sample (not bloods) is counted?

Also there appears to be a hike in cases labelled m.tuberculosis complex in the published PHE data. This is the overall term for bacteria of that type, including but not exclusively m.bovis. So while drug therapy is tweaked to accommodate m.bovis, the data may not be altered. The PHE report explains: 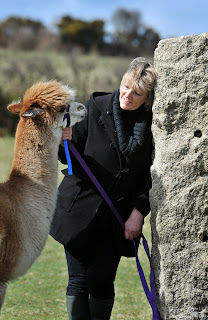 Historically the passage of data between AHVLA and Public Health is a one way street. AHVLA have to report cases of TB lesioned animals to PHE, but very rarely is contact made with AHVLA to spoligotype the strain found in humans and run it's cause to ground.

And that is incredibly frustrating for the staff at AHVLA, who have to jump through all kinds of data protection hoops to share these vital communications.

Mr. Kennedy's story has details about how the disease has affected Dianne Summers (link), whose story we have explored many times.


Public Health England still quantify 'risk' to zTuberculosis as exposure to 'unpasteurised milk, foreign travel, drugs and inhabiting homeless shelters'. But exposure to the increasing amount of bacteria from ‘environmental’ sources is an unknown quantity. Neither Dianne Summers nor her alpacas have been exposed to any of PHE's list of ‘risk’ opportunities, but the alpacas are dead and Dianne has z Tuberculosis.

What is thought to be the first case of zTuberculosis as an  occupational disease (link) was reported at an inquest this year. This was thought to be a case of recent exposure in an abattoir worker and farmer from Uttoxeter. It is not thought that Mr. Sargeant ticked any of PHE's boxes for 'risk' either.

And finally, we would also remind readers of  this case (link) of a young Cornish woman, her child and her dog, all infected by the same strain of zTuberculosis in 2007. The source was thought to be badgers which inhabited the bottom of her garden.

And again, there is no box on PHE's risk form which would generate a tick for that.
Posted by Matthew at 7:51 PM