Section 10 (2) (a) of the Protection of Badgers Act (1992) allows for the culling of badgers 'to prevent the spread of disease'. But a £1m bung from the Political Animal Lobby in 1997 purchased a moratorium on this part of the Act and in private correspondence, Natural England confirm that no licenses have been issued since then.

In his raft of Parliamentary Questions lobbied in 2004, Owen Paterson asked "What was the current policy on the issuing of licenses under this section of the Act, and how many the Secretary of State (then Madame Beckett) expected to issue in the next 5 years. [158605]

And as far as we were aware, that was still the situation. Until today. When we read Natural England's letter of reply to the Badger Trust's hissy fit query over the extension to the Gloucestershire pilot cull.

These pilot culling areas were we thought, to determine whether free shooting was a humane way of dealing with badgers. And an expert group will examine the results and the protocol, when they finish.
But perhaps we were wrong? Paragraph 5 of the letter, explains:


5. But the purpose for which the licences were granted in Gloucestershire and West Somerset is disease control. Thus it is incorrect to characterise the cull as being for 6 weeks only.

So not to test the protocol at all? But for disease control? Well, well, well.


8. The purpose of the requirement for a 6-week limit to the licensed period of culling was to ensure that every effort would be made to achieve the objective of reaching the minimum number to be culled within the six weeks.


At no point has it been said by Defra or by the CVO that, if culling did not achieve the objective of reaching the specified minimum number within the six-week period of the annual cull, then culling would never be permitted to continue. Indeed it would be irrational to have done so, given that the purpose of granting the licence was to reduce bovine TB, if a further licence would achieve a greater reduction in bovine TB.

The letter from Natural England is on this link. And the Badger Trusts's original challenge. (- link) is here. 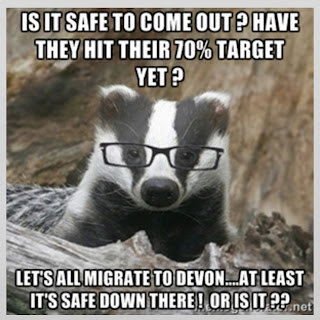 The original wording of the NE license for the pilots is worded as a "TB AREA CONTROL LICENSE ' which could mean controlling badgers in an area where sentinel tested cattle are flagging up TB, regardless of outcome for the cattle - as in the RBCT Badger Dispersal Trial. But equally, it could mean controlling badgers to prevent the spread of disease within such a TB area. Whatever NE wants it to mean, we think.