... and beef cows to decorate the landscape?

A suggestion from Professor Charles Godfray, from Oxford University, who delivered the prestigious annual Bledisloe Memorial Lecture at the Royal Agricultural University, in Cirencester, last week. is that dairy cows be housed 24/7 to protect them from infected badgers, while beef cattle should graze, to add to the landscape value.

It's not April 1st. and  Farmers Guardian - [link] reports his suggestion thus:


Farmers should consider keeping more cattle indoors to protect them against bovine TB (bTB) infection where the disease is being spread by badgers, a leading academic specialising in food and farming has suggested.

That is not so daft as it sounds, as we reported last year, in this posting - [link] where a restock herd of dairy cattle were 'incarcerated' - but safe. And regularly, it is noted that cattle herds will test clear in the winter, as cattle are housed away from pasture (and providing feed stores and access points to buildings are badger proofed) only to fail skin tests after a summer of grazing, 'au naturale'.

But now an Oxford academic, whose claim to fame in 2005 was a paper on the sex life of yeast, (Goddard, M.R., Godfray, H.C.J. & Burt, A. 2005 Sex increases the efficiency of natural selection in experimental yeast populations. Nature 434, 636-640) wants to rearrange the life of Britain's cattle herds, to suit infected badgers? Professor Godfray's  speciality appears to be the  biological control of parasites in insects. He is a parasitologist. We suppose he could broaden his scope to include other, larger parasites?


"I think there are some really interesting questions about the way we farm and the way we manage land in the west of the country,” said Professor Godfray.

Interesting maybe, but missing the point of 1:3 tractor free slopes and wonderful grassland which supports grazing animals but not machinery, he also pointed out that:


The mixture of pasture and woodland where many cattle graze in the west of England was an ideal breeding ground for worms, which in turn, creates perfect conditions for badgers.


“There are higher densities of badgers in the west country at the moment than ever before,” Prof Godfray said.


“We like to farm in a particular way. We could farm in other ways. You could bring more dairy cattle indoors in larger facilities so they can be protected from badgers. You could still have beef cattle out so the landscape would not look different.”

Obviously other grazing mammals succumbing to 'badger' tuberculosis have failed to cross the good Professor's radar. Or perhaps we should house them all? Alpacas, sheep, pigs, goats, deer, bison - a modern day Noah's Ark.  And then farmers could run badger sanctuaries, as a diversification.

And when the eminent gentleman said 'housing' of dairy cattle, as Ken Wignall points out in his brilliant  cartoon to illustrate this bovine fantasia, we don't think he meant, errr ' farm house housing'. 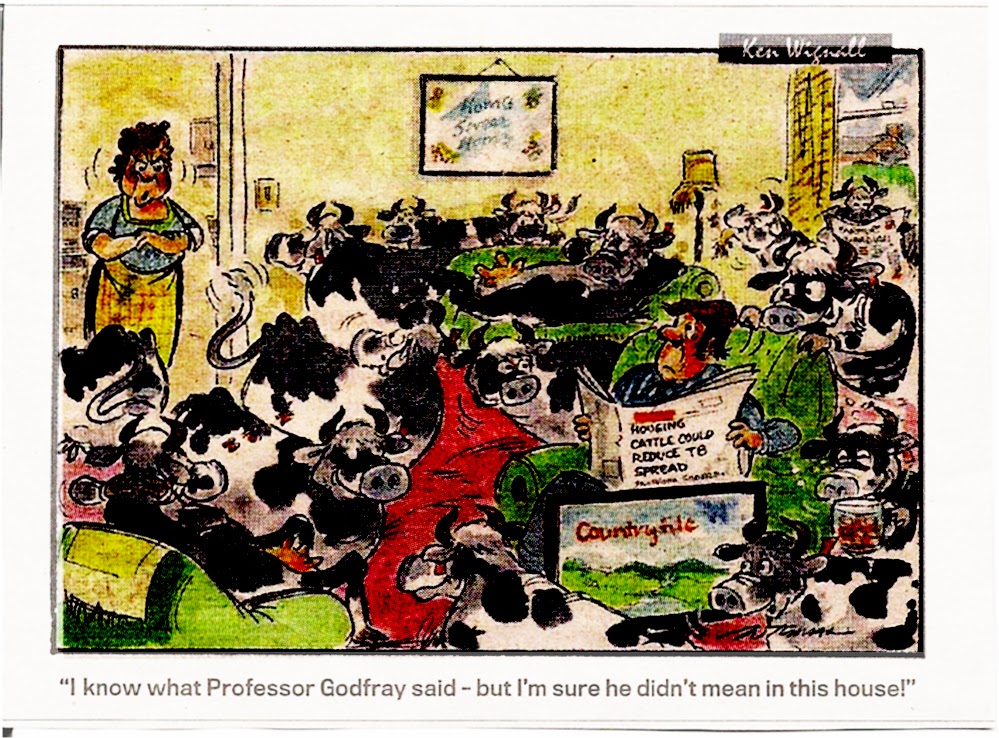 .
Or perhaps he did?

(Ken Wignall's cartoon appeared in Farmers Guardian, December 5th. and we reproduce it with thanks.)