Mistakes and Evans - a modelled scenario

The headlines this week have included an astonishing abstract from Mistakers Moustakas and Evans of Queen Marys University of London (QMUL) in which their computer model suggests that more frequent TB testing and keeping cattle outside in the winter are the best ways to control bovine TB (bTB) And that culling badgers has minimal effect.

Amongst many others, Farmers Guardian - [link] has the story. The abstract which has got the Badgerists so excited is on this link - [link]

But the paper itself is a wonderful fairy land of cells in which badgers move, cells, (square or round) in which cattle move and apparently, so does zTuberculosis. At least in theory. If the cells are correct, the movements are correct and the input data used was solid, this may have been a useful exercise, but...
The paper asserts:

Computational models provide a valid alternative to expensive experimental approaches (Godfray et al. 2004) as a method of testing the likely effects of various strategies designed to control or eradicate TB in cattle. To be useful such models need to represent the modelled system in sufficient detail to allow realistic predictions to be made about the outcome of any control strategy (Evans et al. 2013b

True. but if the data input is incorrect, aged or derived from flawed assumptions? What then?

This justification is part of the basis of this particular 'theory' now expounded by Mistakers Moustakas and Evans who explain:

However, entering other people's 'assumptions', even if they've been published, is never a good way to begin, especially if actual available data tells you it is way out of date, or just plain wrong.

Much of the modeling seems to stem from 'Meyer et al : 2007 - who is mentioned quite a lot. As we haven't heard of  an epidemiologist called Meyer, we assume that he may have developed mathematical models, the calculations for some of which is explained below:

We note that present, factually incorrect and expanded are the 'assumptions' made by the diminutive professor, John Bourne who explained so helpfully in his Final Report (2007) [ 7:24] that actually looking at herd breakdown risk assessments was just too time consuming, so his team had assumed two parts cattle (contiguous or purchased) and one part badger .........   and switched on their model.

This is a chart of what they assumed and 'roughly estimated'. 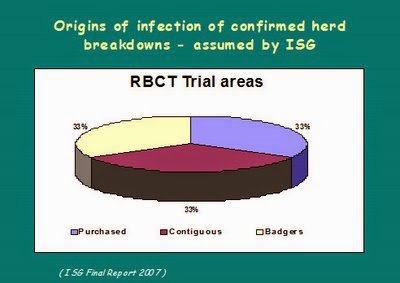 The data from the same period for the county of Devon,  which they received but failed to examine, showed a completely different picture, with at least 76 percent and up to 90 per cent of herd breakdowns due to infected badgers. This according to the data sheets, painstakingly filled in by AH staff. 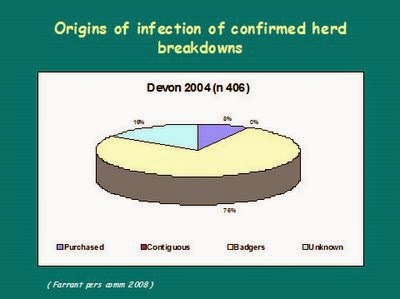 This paper of Mistakers Moustakas & Evans is peppered with mathematical terminology designed to baffle brains. They speak of 'regressions, co-efficients and remaining parameters' but also, echoing the ISG models, use words such as 'assumptions and estimates', building on previously well churned ISG sand.
The sources of cattle and badger data are also predominantly post 2007, and thus ISG / Woodroffe material.

We suppose we should be grateful they didn't include the modeled scenario published in July 2014 by Dr. Ellen Prook-Bollocks,  Brooks-Pollock, who put 100 per cent of cattle into her model, switched on, and then exclaimed that if we culled all the cattle, - [link] zTB would vanish.

This well publicised model took cattle to cattle transmission, cattle into the environment and cattle movement, describing them as 'idealised control measures'.

But we digress: in the Evans paper, badger numbers seem way too low, as is tuberculous infection within the badger population, now given by FERA at around 50 percent in areas of endemic infection.(Chambers et al)

And much as we hate to break into the QMUL modelers' bubble,  actual data on what makes a difference does exist, and has done for some time. As is shown above and in PQs below.

A decade ago, Shadow minister Owen Paterson, MP asked for the results of the Thornbury badger clearance and why it had been so successful at reducing TB in cattle to zero: a situation which lasted at least a decade. They didn't ask a computer, but the answer was unequivocal:

So not 20 years of buggering about trying to cull out infected badgers in ones and twos, very occasionally? (Or even taking pot shots at the scent markers ?)

And bringing this right up to date are the published results from the Somerset cull, lasting merely a well publicised (and interrupted)  few weeks in 2013, when 34 per cent of herds in the cull area were under TB restriction.

A herd data check before the second cull in 2014 and reported here - [link] showed that this figure had reduced to just 11 percent - a drop of almost 68 percent.

We are pleased that Mistakers Moustakas and Evans appear to appreciate the accuracy of the skin test though, observing that: "

But we also note that their model predicts MORE cattle infected while tucked up in their winter housing.
However, the current advice and biosecurity guidelines issued by the APHIDs  APHA, and expanded by Professor Godfray recently, is to place all dairy cattle - [link] in hermetically sealed boxes, into which badgers cannot gain access.

Thus cattle farmers receive diametrically opposed views even on that one small piece of husbandry advice.

So as all this taxpayer funded 'research' spills into the press with headline grabbing sound bites which inevitably exclude badgers, hang on to those basic facts. Everything else is smoke and mirrors. And sometimes, simple squared really does equal stupid.