It's August and  MPs continue their annual bucket and spade jollies while farmers in areas of endemic zTB attempt to comply with some of the most ridiculous and imaginative obstacles - [link] ever dreamed up to prevent culling badgers infected with the disease.

But very quietly, and with no fanfare of which we are aware, Professor Wellington's paper on PCR is now published.

The project was set up in 2012, and some spurious results were offered to the then Secretary of State, Owen Paterson MP, which we quoted in this posting - [link]

They were premature and wrong, as the following outcome has shown. - [link}

This project was commissioned by Defra, paid for by us, the taxpayer:  and has been met with a deafening silence. Not a peep out of the usual suspects, who are busy deepening the polemic between people running around with black and white cornflake packets on their heads, and farmers at the end of their tether trying to cope with ever increasing losses of reactor cattle (and sheep, pigs and goats)

In the first paper, Professor Wellington offered the following results of badger faecal samples taken in the summer:

And she summed up the project, illustrating it thus:


"We suggest that a small number of social groups may be responsible for the majority of m.bovis shed in the environment and therefore present the highest risk of inward transmission". 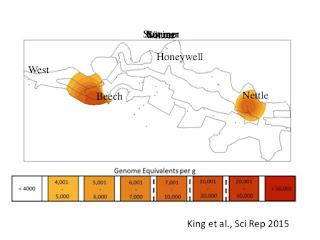 This paper has now been accepted by and published in the Journal of Clinical Microbiology. It can be viewed on this link - [link] and here is its conclusion:


"In addition to being equally or more sensitive than live-trapping diagnostics, the qPCR assay with latrine samples benefits from being non-invasive and less logistically challenging than live trapping and testing.


Our study has identified the potential value of qPCR testing of fecal samples collected from latrines for monitoring M. bovis shedding in badger populations at the group level. This may prove to be a valuable adjunct to trapping and live testing in field studies to investigate the epidemiology of M. bovis spread in badger populations.


However, the approach could be implemented as an alternative to capture and testing when the cost of the latter may be prohibitive for monitoring disease risks over relatively large areas.


For example, qPCR testing of latrine fecal samples could be applied at the edges of the areas in which TB is currently endemic in the United Kingdom or throughout high risk areas, in order to provide spatial information on relative levels of environmental contamination, which may facilitate monitoring of spread and targeting of management."

So there we have it. A non invasive field test, offering 100 per cent sensitivity using latrine fecal samples taken in the summer, with which to identify those badger groups causing most of the upspill into other mammals, farmed or companions. A targeted management strategy.
The cost, Prof. Wellington puts at around £200 per sett tested (20 samples)

This is something many farmers have been pushing for, as contrary to perceived wisdom lobbed about by the badgerists, cattle farmers do welcome healthy badgers as part of the overall ecology.

We would also point out that Natural England has issued recent 007 licenses to an establishment in Somerset- [link] allowing the owner to euthanize infected badgers -[link] prior to releasing their 'rescued' companions. Is there a difference?

So, an open question to Dr. May, et al.
Now that Professor Wellington and her team have developed a non invasive field test to identify infected groups of badgers, and a test which has given such stunning results, would you oppose its use merely to keep alive such animals as this poor creature, below? 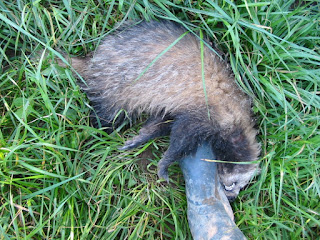