Would you choose a veterinary professional to tune your guitar? Probably not.

But today our Secretary of State for Agriculture tweeted about his meeting with superannuated star gazer, Dr. Brian May - he of Save Me fame - to discuss a way forward on the thorny question (at least for an upwardly mobile politician) of zoonotic Tuberculosis. 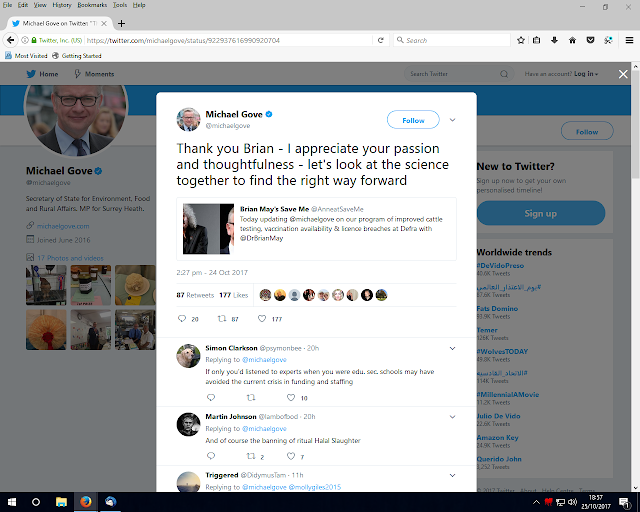 This was the Tweet from Save Me, updating Gove on the way forward. Improved cattle testing, vaccination and stupid farmers. Nice one. 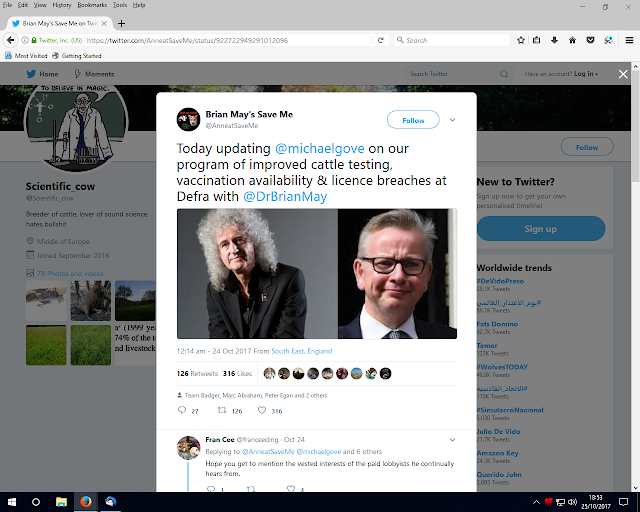 Now Gove is not the sharpest knife in the box, having (according to Private Eye) attempted to unblock his lavatory with a vacuum cleaner - until he was stopped. We understand that he is however well known for echoing the thoughts of those to whom he spoke most recently.

So perhaps some refreshing factoids better make their way into his shell like.

For instance, in our PQs over a decade ago now, we asked the reason why certain areas of the UK, which had undergone a thorough cull of badgers, had achieved such success.

The answer was unequivocal and needs to be inscribed over the door of every building occupied by this most political of government departments, and especially the office of the Secretary of State:


" The fundamental difference between the Thornbury area and other areas [] where bovine tuberculosis was a problem, was the systematic removal of badgers from the Thornbury area. No other species was similarly removed. No other contemporaneous change was identified that could have accounted for the reduction in TB incidence within the area" [157949 - Hansard]

Other areas too had spectacular success, including East Offaly, Steeple Lees and Hartland, but also the four area trial - [link] in Ireland with a reduction in cattle TB of around 96 per cent.

And two decades or more ago, these areas had no bolt on cattle measures at all. Particularly of the sort Dr. May and his cohorts propose.

Just, as the PQ said 'a systematic removal of badgers from the area'.