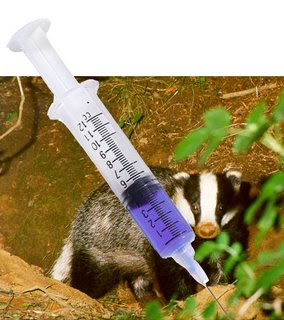 We are most grateful to Swiss veterinary practitioner Dr. Ueli Zellweger, who offers a thumbnail sketch of BCG, the vaccine with which Defra hope to stem the tide of badgerTB (and thus cattle casualties, camelids, cats and dogs, goats, sheep and pigs) by injecting the product into badgers, which are likely to already have er, badgerTB.

Dr. Zellweger and many others are less than enthusiastic about Defra's plans, as we posted earlier. We quote Dr. Zellweger's short paper, in full.

"DEFRA and its TB Vaccine for Badgers and Cattle

The vaccine is called BCG which stands for Bacille CalmetteGuérin. This strain of bovine TB bacteria was found 88 years ago and has been the main one reproduced for vaccination ever since. It is common practice to cultivate virus and bacteria for a long time for after some 10 to 20 generations they tend to loose their power to infect but still may produce specific antibodies.

BCG is rather an uncommon type of vaccine. In most infections the infected body copes with production of a large amount of specific antibodies within a few days which protect against an infection becoming serious trouble and these antibodies can be traced for diagnosis. This is not so with Tuberculosis for 2 reasons:
1. TB bacteria need 12 to 18 hours to multiply ( E. Coli takes 20 minutes only).
2. TB bacteria have a waxy coat – quite unusual in microbes – to which antibodies cannot attach themselves.

Therefore the body’s defence against TB has to work by making an allergic type of reaction instead of antibodies, a reaction which is made use of when humans and cattle are skin tested for TB.

We have pointed this out on numerous occasions, that 'reactors' to the skin test, both cattle and human, are 'reacting' not necessarily to active or infectious disease, but producing an 'allergic reaction' to exposure to the bacteria which causes disease. A serious, often fatal bacteria, which it must be stressed, has no place plastered in increasing quantities across our green and pleasant land.

In the past BCG was used for millions of doses for healthy young babies and in some countries it is still administered to a certain extent. It does not prevent an infection but minimizes the risk of it turning into a serious generalised form. BCG’s efficiency was never over 80% and new scientific papers say it is dubious to rely on it.

The way BCG should work in already diseased badgers (and cattle) is highly questionable, meaning it is much more likely to produce adverse reactions such as awaking existing “ silent “ or low scale Tuberculosis.
The Merck Veterinary Manual covering all aspects of Vet Medicine worldwide comments:
“ The BCG vaccine, sometimes used to control TB in man, has proved to be poor at protecting most animal species, and inoculation often provokes a severe local granulomatous reaction.“ This is likely to be a quite hurtful process and the vaccination site itself might well end up as an abscess.

As seen in trials one cannot trap more than 60% of all badgers roaming around. Therefore if 60 out of 100 badgers are vaccinated with a vaccine which is only efficient to a maximum of 50 - 80% ( in healthy animals! ) you end up with far less than 50 badgers with a rather dubious protection.

It is well known and common practice that if you do not succeed to vaccinate up to 95% of all animals of a target species, the long term positive effects in an area are likely to be pretty close to zero. If BCG is used as planned by DEFRA there will be huge perturbation and stress for all badgers, high costs and risk that the whole project will backfire.

In the hot spots some 50 % or more of all badgers might carry the TB infection already increasing the risk of TB spreading when being vaccinated and according DEFRAs plans all badgers should get a booster vaccination every 12 months making things even worse.
Who will be liable when it all goes wrong?

Taking a wild guess at any future 'culpability', not a career politician, that's for sure.
Posted by Matthew at 8:30 PM