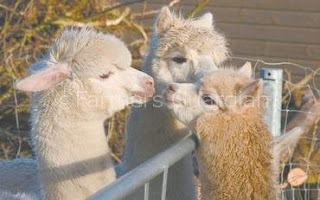 We are grateful for sight of this week's Veterinary Record, where a report investigates an outbreak of disease which appears to be the result of convoluted movements, undertaken by some of this country's alpacas.

We have touched on the thorny problem of tuberculosis and camelids before with an on-going breakdown in a herd of Cornish alpacas covered by Farmers Guardian.

The report was submitted by VLA staff at Starcross, Exeter and follows the fortunes of some Devon alpacas, sent to a herd in south-east England for mating, where they were mixed and stirred with alpacas from different parts of GB, there for the same purpose. All are subsequently dead, with we understand, some onwards transmission from this outbreak evidenced on the Devon farm. The spoligotype isolated from the Devon females was neither Devon nor West Sussex, but proved to be Shropshire. A female from Shropshire visited the stud over a similar time period, and she had subsequently died.

The report points out that there is little or no documentation on the transmission of tuberculosis between alpacas - but as we have said, if a scientist hasn't seen something, that does not mean it does not happen. The saga of this deadly triangle is described thus:

"Four adult females alpacas from a herd in Devon (A) visited a breeding herd in south-east England (B) from October to December 2008. The owner noticed clinical signs in two of these, including lethargy, weight loss and occasional coughing, four and eight weeks respectively after returning to herd A. The disease was progressive and despite treatment under veterinary supervision, both alpacas eventually died in May 2009."

The report describes clinical postmortem results, including extensive lung lesions, pulmonary cavitation and lesions on the kidney in one alpaca. M.bovis was cultured and identified as VLA type 35 or SBO134. (The part of Devon from which the alpaca came is usually home to badgers and spillover sentinel cattle hosting VLA type 11)
Searches of VLA's extensive database revealed that SBO 134 had been reported in a Shropshire alpaca (Herd C) which had presented with weight loss and respiratory disease over a period of three weeks, and which had died in February 2009. This animal had not been off the farm for 16 months, but another female from the herd had visited the stud farm in the south east (Herd B) in September 2008, and remained there until December, when it developed 'respiratory disease' and died. It was not postmortemed, although clinical signs were consistent with TB.

The Veterinary Record report is submitted by D.F Twomey and T.R. Crawshaw of Exeter VLA, who describe the predominant distribution of tuberculous lesions in alpacas which they had postmortemed as "within the lungs and associated thoracic lymph nodes", which they say, is "similar to most TB cases diagnosed in British South American camelids." 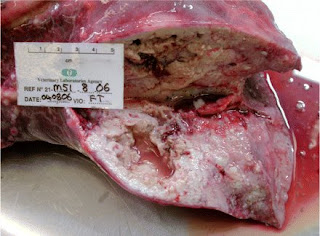 The illustration shows an camelid lung, with extensive necrosis and cavitation. The authors of the VR report consider that a "heavy concentration of thoracic mycobacterial infection" indicates that the respiratory route is the most likely means of transmission between these animals in close contact. This effect they say "may well be enhanced when some of the lesions show pulmonary cavitation".

In other words, camelids are very susceptible to TB, the disease advances extremely quickly, most lesions are found in the lungs and, unlike cattle lesions, these are pretty loaded with a 'heavy concentration' of bacteria, especially when 'pulmonary cavitation' occurs.

Control over this potential swamp of tuberculosis is non-forthcoming from Defra, who believe it to be 'a minor problem'. Camelids are outside the TB regulations in England, thus movement records, AHO entry to trace-back premises and herd restrictions may be considered 'voluntary'. Or kicked into the 'too difficult' box? And then there is the thorny question of a test. At the moment the intradermal skin test is the only test recognised to indicate TB free herds - of any animal, including camelids. No matter that it is 'meaningless' on camelids (Vet Record 2007.) Nevertheless, herds are exporting alpacas, being released from TB restriction (always assuming they have actually reported ill-health or deaths of their animals, and not buried the evidence) and tested or untested, offering mating services such as undertaken with such devastating results by the Devon herd described above, and exhibiting these delightful creatures within children's play areas in tourist attractions and agricultural shows.

"These new TB cases provide evidence of spreading M.Bovis infection through uncontrolled movements of South American camelids between holdings, particularly those situated in recognised endemic TB regions." and they warn "The zoonotic risk to human contacts is also a serious consideration to those handling potentially infected animals".

That risk is ever thus, as we posted here.
Posted by Matthew at 4:49 PM

I cannot believe how naive DEFRA are being about TB in camelids.What on earth is the point of attempting to introduce farmer responsibility for animal disease when there is potentially a pool of infected alpacas,which do not have compulsory testing,moving around the country apparently with impunity?
I appreciate that there are some responsible camelid owners out there who undergo voluntary testing on their stock,but with a disease like TB,there cannot be one rule for cattle and another for other susceptible species.

We agree docsheep. The stumbling block is not the creating of a statutory instrument to include such species into England's TB regulatory process, but the collective dragging of heels within Defra to apply it. That together with a serious gap in ante mortem diagnostics, the skin test being described (Vet.Rec. 2007) as "so poor as to be meaningless."

None of this is insummountable, given a bit of joined up thinking.

Other diagnostic tests are available and may be used in tandem, provided camelids are within the TB regulatory system to begin with. But with stud farms offering female alpaca B&B, rent-a-male or the quaintly described 'drive-by-matings' where females visit on a daily basis, the potential for spread of disease is huge.
And yes, at the moment, there is one rule (including a 6 day standstill after 'on' movements) for cattle, and very little at all for many other species, some of whom are quite capable of contracting and transmitting TB, as this report shows.

The only time Defra can get involved is if the owner voluntarily reports problems, either deaths or illness, which subsequently turn out to be TB, or if the holding is shared with cattle which may act as sentinels.

I hate to say it, Matthew, but Government thinking on this issue is entirely "joined up." If the needs of people involved in the large, traditional and already highly regulated cattle industry can be ignored in favour of that section of the electorate who cannot bear the thought of any badger control, what chance is there of spending taxpayers money on inventing new tests and imposing them on the tiny minority who choose to keep camelids? If the right thing had been done to protect cattle there would not have been a problem with camelids.

Agree with you Andrew, but the difference is the volume of protests. Cattle farmers have been alternately offered carrots (enhanced compulsory purchase monies) or sticks (bio security deductions) while dedicated and hugely knowledgeable government vets have been gagged by their final salary pension commitment and government contracts.

Defra have conveniently thrown the infectivety of the environment with badgerTB, and its inevitable spill back into other species into the long grass.
But camelid owners have deep pockets. These furry little lawnmowers are several £K each and several owners are facing ruin after TB from 'environmental' sources has ripped through their herds and after negative skin tets, as the primary test, continues to do so.
There is no compensation structure in place for alpacas or llamas, merely an ex gratia offering from Defra for reporting problems. In many cases this is several £K short of true value, with (as in cattle insurance) the loss adjusters way ahead of the game balancing 'disease risk' with premiums or even the possibility of insurance at all. Likewise the 'stick' of SFP deductions and/or biosecurity losses have no effect if it is not claimed in the first place.
With the apparent infectivety of camelids within a herd, the spread within an (undiagnosed)herd is fast and furious. And this is compounded by unregulated or reported movements.
Under those circumstances the potential for spread cannot be undersestimated, we think. Neither the effect of onward transmission to wildlfe in other areas.
But as with the cat owners, the owners of alpacas will not lie down and accept this situation quietly.
And as the man says, 'every little helps'.