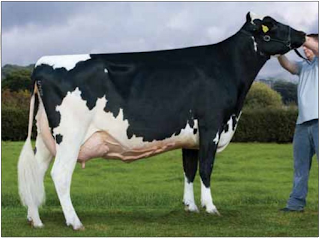 ...   that she contracted TB from wildlife? So said a curt note from the Badger Trust in reply to a farmer in Wales, about to lose this beautiful cow. For good measure they also said they cared about ALL animals. You could have fooled us;  they sure as hell don't care about badgers riddled with TB. Those collecting tins wouldn't rattle much if they'd showed the reality of TB in their chosen species.

The answer of course, is quite simple. Whenever a new TB breakdown is flagged up by sentinel tested cattle, then AH do a 'risk assessment' to discover the source. The clue is in the word 'risk'. AH officers trawl movement books and BCMS records (amongst other documentation) back to a couple of months prior to the herd's last clear TB test.  Any cattle sold will be traced and if alive, check tested.

But if like many self contained pedigree herds, no cattle have been purchased in, and if like most of us, boundaries are secure from nose to nose contact with any other cattle, as bTB bacteria don't fly in with the tooth fairy and aren't wind borne,  then the conclusion has to be .... wildlife.
Then it is down to whether deer can scramble under gates and share food with housed cattle.

When these assessments are done, the Badger Trust's money machines favourite  mammal starts way down the list of possibles. But guess what? In the majority of cases, they come out AH's favourite. By default, and having excluded every other possibility, up to 90 per cent of TB breakdowns in the West and SW are officicially placed at the door of badgers.