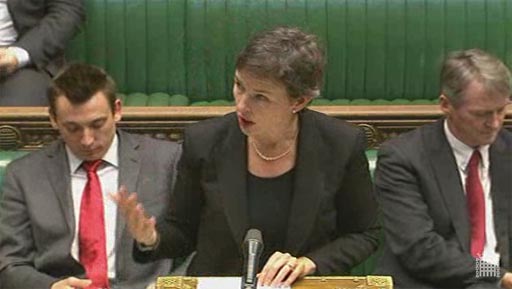 A minor but nonetheless important parliamentary event took place yesterday, with the opposition day debate on the badger cull, against the motion that, "this House believes the badger cull should not go ahead".
Fronted by Mary Creagh, Labour MP for Wakefield and shadow secretary of state of the environment, she opened with the question: "is culling badgers the most effective way to stop the spread of bovine tuberculosis?"
This is the classic straw man ploy, setting up a false premise in order to knock it down. No one with any sense will actually argue that a cull will stop the spread of what I prefer to call zoonotic TB – the bacterial strain has long adapted to multiple hosts and can no longer be considered a bovine pathogen.
To any sensible person, the cull is simply one tool in a complex "toolbox" of measures available to control the disease, which in the UK is largely out of control, spreading geographically and affecting increasing numbers of animals.
Thus, it would have been far more appropriate to address the issue of whether, in the context of the disease having established itself in the wild fauna, zoonotic TB in domestic cattle had ever been successfully eliminated without first dealing with the wildlife reservoir.
And it is here, as in many other things, we can benefit from taking a broader view of the situation, looking beyond our borders, and seeing what is happing elsewhere. And, if we do, we find that the UK is by no means alone in suffering from the upsurge in zoonotic TB.
For instance, in the Bieszczady region in the southeast of Poland, not far from the Ukraine border, there has been a major outbreak in wild bison (below). 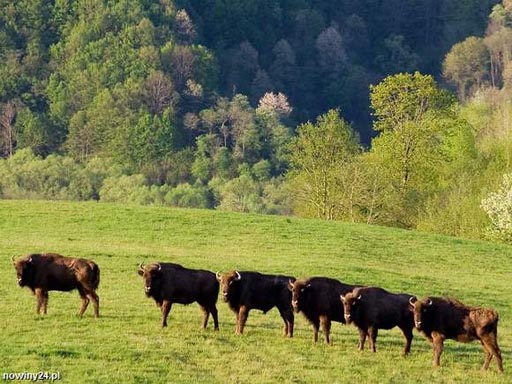 Significantly, the local veterinary authorities carried out investigations of other wild animals and, in mid-April discovered infection in wild boars – to which badgers are closely related. As recently as May, tuberculosis had been confirmed in three pigs that had died in the Bieszczady forest, in the same area where previously tuberculosis had been found in bison.
This broader view, therefore, underlines the relationship between the disease in ruminants and other fauna, a relationship so well established in veterinary circles that, when Mexico domestic cattle were found to be infected with zoonotic TB, the authorities immediately undertook surveillance of wild ruminants in what was called the "wildlife-livestock interface". White-tailed deer, North American elk and red deer were “harvested” via controlled hunting.
The relevance of the "wildlife-livestock interface" is further emphasised by official Italian veterinary advice, which lists the different "risk factors" in production systems, including as a major factor in the spread of TB, "poor surveillance systems and control of bovine tuberculosis in wildlife".
Thus, in a major outbreak of zoonotic TB in cattle in Sovona in 2007 – a region which was a long history of TB outbreaks, much emphasis was placed on controlling the wild boar population, which were implicated in the spread of the disease. Wildlife management was thought essential before there could be a return to what was termed "normal care".
In Spain, it has long been recognised that high densities of wildlife, mainly Eurasian wild boar and red deer have been able to maintain M. bovis in circulation, even in the absence of domestic livestock, this forming what is technically known as a self-sustaining “maintenance” reservoir.
In 2008, a ground-breaking study of Spain's Doñana National Park proved unequivocally the link between infection in the domestic cattle, using genotyping to demonstrate the epidemiological relationship. European wild boar, red deer and the fallow deer were examined for the presence of zoonotic TB. The infection was confirmed in 52 percent of wild boar, 27 percent of red deer and 18 percent of fallow deer.
The results obtained confirmed that wildlife species were infected with the M. bovis strains which are more prevalent in cattle, with the official report concluding that introduction of domestic animals into wildlife areas when there no guarantee of freedom of disease and without appropriate diagnostic techniques and control measures represented a risk to cattle health. Researchers suggested that identifying and culling animals with advanced bovine TB could reduce the number of super-shedders and the availability of contagious carrion.
This builds on the work from the Office International des Epizooties (OIE), which reports that 22 percent of countries with TB infection have detected bovine tuberculosis in wildlife (deer, elk, wild boar, feral goat, buffalo, possum, ferret, mink, hedgehog, lion, cheetah, kudu, baboon, and seal) in the last 10 years. Where wild species become "maintenance host" for M. bovis, they can be responsible for continuing outbreaks even when infection is eliminated from domestic cattle.
The best-known examples of this dynamic are cited by the OIE as the European badger (Meles meles) in the United Kingdom and the Republic of Ireland, the possum (Trichosurus vulpecula) in New Zealand, the white-tailed deer (Odocoileus virginianus) in Michigan, which has served as the presumptive source of infection for cattle herds and carnivores, and the African buffalo (Syncerus caffer) in Africa, which has spread the infection to predators.
Thus, when a very recent TB outbreak was observed in Bavarian cattle, investigation of deer and roe deer in the Upper Allgäu were carried out and infection of the same type was found, with a prevalence of 18.2 percent. As a result, 1,614 red deer have been shot by the deer hunting community. Similarly, recent outbreak in Swiss cattle, in the Cantons of Fribourg, Vaud and Valais – the first cases for 50 years – deer have been examined for potential infection.
A reminder of the zoonotic character of the disease, incidentally, comes from the latest outbreak in Germany where, on a farm in the district of Rotenburg, a farmer has succumbed to the disease. In this country, the owner of a flock of alpacas which was found to be infected, is currently being treated for a serious case of the infection, and may need an operation to remove one of her lungs.
There has also been a recent outbreak of zoonotic TB in Belgium, which has been free from the disease since 2003 – the disease having been discovered in a slaughterhouse in Holland. Investigations are currently being carried out, but it is significant that the affected cattle are from a beef herd which does not have contact with other cattle.
From the UK's perspective, some of the more significant outbreaks have been in France, where the increase is regarded as "worrying" by the authorities. There, we note, in some prefectures, badgers have been associated with the spread of disease and the Ministry of Agriculture is seeking destruction of badger setts when they are classified as harmful.
In France, currently, a policy of whole-herd slaughter is practised, but there is also no reticence about culling wildlife. In February 2012, M. bovis infection was detected in wild boar in a game park in Marne department, previously a bovine tuberculosis-free area. In order to prevent spillover, all the game present in the park was slaughtered, including 280 wild boars, where the prevalence of infection was determined at 7.3 percent. 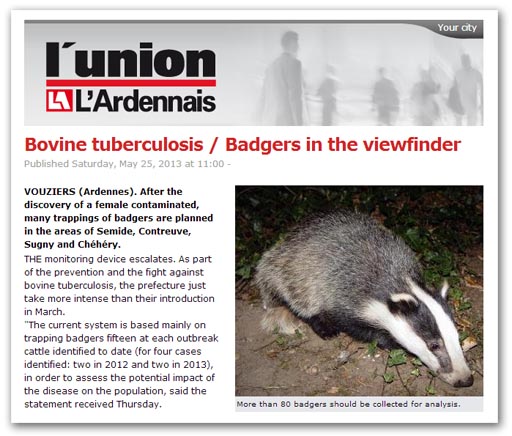 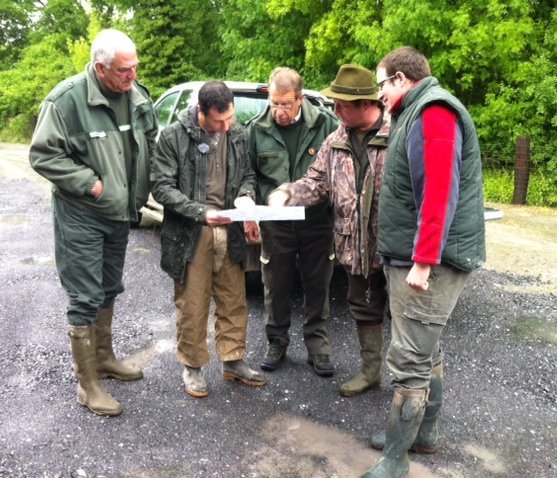 The local hunts were involved (pictured above) by the prefecture in the Ardennes, through the formal system of "lieutenants de louveterie" and in the first days of this month, systematic trapping and analysis of badgers was conducted, with 60 badgers taken. Four have been found to be infected.

Control measures are ongoing, and one notes that while the media here lauds a former pop-star guitarist, who believes M. bovis to be a virus rather than a bacterium, Pascal Mailhos, prefect of Burgundy and Côte-d'Or, recently awarded medals to officials actually dealing with TB in the front line, including Jean-Luc Loizon, the local Lieutenant louveterie. This is an interesting reflection of relative national priorities. 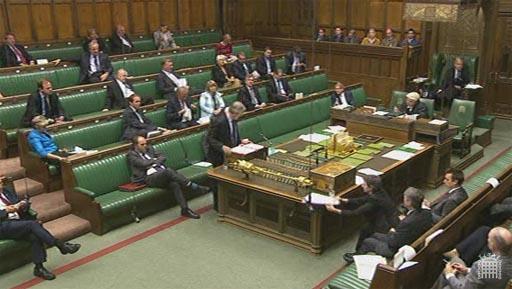 But, as he went into bat for the government's plans, no one was more conscious of this "bigger picture" than Secretary of State for the Environment, Owen Paterson. One of the most eurosceptic ministers in the Cabinet, he regularly outflanks his own officials at EU council meetings by being able to speak with his French and German counterparts, whose languages he speaks fluently.

And thus, while Mary Creagh flounders around as the perpetual "little Englander", Paterson is in touch with the European and global scene, using data from all over the world to strengthen the case for dealing with the wildlife reservoir over here.

Fortunately, the "bigger picture" prevailed and the motion was defeated by a handsome majority. Owen Paterson lives to fight another day.